British Members of Parliament (MPs) are voting again Wednesday evening on whether to block a “no-deal” departure from the EU.
The vote comes after lawmakers rejected Prime Minister Theresa May’s Brexit deal Tuesday. 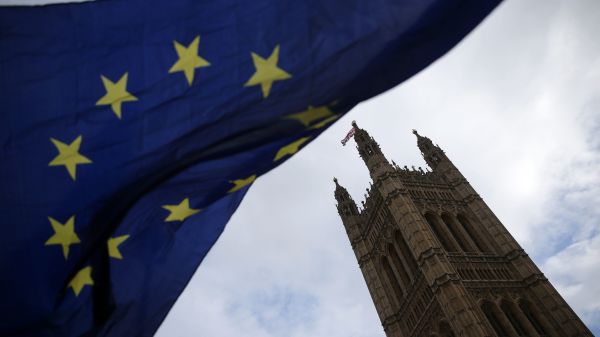 As if yesterday’s momentous rejection of the U.K.’s Brexit deal with the European Union was not enough to unsettle markets, British Members of Parliament (MPs) are voting again Wednesday evening on whether to block a “no-deal” departure from the EU.
The majority of MPs (391, to be precise) voted against Prime Minister Theresa May’s agreement, including 75 from within her own Conservative Party. Voting against her deal doesn’t necessarily mean that MPs will vote this evening to support a “no-deal” departure, however.
In fact, for the majority of MPs, a no-deal departure — in which the U.K. leaves the EU on March 29 with no formal arrangements whatsoever — is seen by many as the worst possible scenario and is expected to cause widespread economic uncertainty.
Infamously known as a “cliff-edge” Brexit, a no-deal exit would mean the U.K. abruptly ceases to be a member of the EU overnight on March 29 with no 21-month transition period in place to gently prepare for life outside the economic and political bloc it has belonged to for 46 years.
‘No deal’ remains the default
As such, MPs are expected to broadly vote against the possibility of leaving the EU without a deal, when they’re asked to commit to eliminating the possibility of a no-deal outcome.
However, it’s not concrete and there’s still a possibility the U.K. could leave without a deal, even if they vote to take that possibility off the table.
May said after her loss Tuesday that a “no deal” remains the default unless a withdrawal agreement is ratified. Meanwhile, a spokesman for European Council President Donald Tusk said Tuesday that the second rejection had “significantly increased” the risk of a damaging “no-deal” divorce, according to Reuters.
“We regret the outcome of tonight’s (Tuesday’s) vote,” the spokesman said. “On the EU side, we have done all that is possible to reach an agreement … Should there be a U.K. reasoned request for an extension, the EU27 will consider it and decide by unanimity,” he added.
Wednesday’s vote will take place at 7:00 p.m. London time and this will be a “free vote” with the government not urging its politicians to keep no deal on the table. Some lawmakers believe it’ll be unwise to take a no-deal scenario out of the equation as it could give the EU the upper hand in negotiations. Some also see it as the purest form of Brexit and will reject Wednesday’s parliamentary motion.
Ahead of the vote, the government announced the country would slash tariffs on a range of imports from outside the European Union should lawmakers opt to leave without a deal.
Another vote Thursday?
There is also another vote promised for Thursday on whether to seek an extension to Article 50 (which oversees the EU departure process) which would essentially push the departure date back from March 29.
However, the EU’s remaining 27 members (known as the EU-27) would have to agree to allow Britain to delay the departure and the U.K. would have to give a reason why it wants more time — especially when the EU has said the deal on offer is not up for renegotiation.
The EU’s chief Brexit negotiator Michel Barnier said in Strasbourg Wednesday that the U.K. had to decide what it wanted, and that the risk of a no-deal exit had “never been higher.”
It’s expected now that the U.K. will plump for a softer Brexit and could once again look at varying degrees of trade relations with the EU including the vaunted “Canada-plus” free trade agreement, a customs and regulatory union for goods to keep supply chains intact or a “Norway-plus” arrangement that would see the U.K. remain a member of the EU’s Single Market but with no say over EU rules.