Mele Kyari, the group managing director of state-owned oil company, Nigerian National Petroleum Corporation (NNPC), has said the absence of a stable fiscal environment in Nigeria was inhibiting the growth of the country’s petroleum industry, especially the upstream sector. 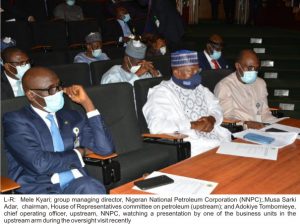 Kyari, who stated this while playing host to members of the House of Representatives committee on Petroleum Resources (Upstream) on an oversight visit to the corporation, said international investors were losing confidence in Nigeria’s oil and gas industry due to its instability in fiscal regime in the industry. He therefore, tasked the lawmakers to act fast and arrest the situation.
“We need to act quickly to move from this unstable situation to a very stable one; and the only way is for us to get the Petroleum Industry Bill (PIB) to work, so that countries and investors can work with us,” Kyari said.
He said foreign capital was needed in the upstream sector to move up the petroleum industry; and that the only way to attract it was to have stable laws and a friendly business environment that could guarantee cost recovery and a decent return on investment (RoI) for investors.
Nigeria, one of Africa’s largest oil producers, has struggled for 20 years, losing some $21 billion in lost investments from international oil companies (IOCs) in that time, to complete the PIB legislation which aims to increase transparency and stimulate growth in the country’s oil industry. The 8th National Assembly managed to pass the legislation – known as the PIB – which was broken up into sections to help to get it through. The 8th House of Representatives passed the first part called the Petroleum Industry Governance Bill (PIGB) in August 2018.
Shell, Chevron, Total, ExxonMobil and Italy’s Eni are major producers in Nigeria’s petroleum industry through joint ventures with the NNPC.
Kyari said that the uncertainty in the upstream sector created by the long delay in the passage of the PIB has led to a number of divestments from the country in the recent past.
The GMD also said that the drive by the NNPC management to entrench the culture of transparency in the Corporation has improved its business fortunes and creditworthiness, as lenders are now willing to grant credit to it.
Musa Sarki Adar, the House of Reps upstream committee chairman, assured that the lawmakers in the committee were ready to provide the necessary support for the Corporation to discharge its duties without hindrance.
He acknowledged NNPC’s efforts at deepening transparency and accountability; stressing that their committee was impressed with the level of professionalism exhibited by the NNPC management, and the leadership role played by Kyari in rallying the oil and gas industry to provide support for the federal government’s fight against the COVID-19 pandemic.
In a presentation, the managing director of NNPC subsidiary, the Nigerian Petroleum Development Company (NPDC), Mansur Sambo, said the company has increased its gas production to 860 mmscf per day, and is now the largest supplier of gas to the domestic market. All the business units in the NNPC upstream arm made presentations to the committee.