Wall Street’s main indexes fell more than 1% on Thursday, as technology stocks were hammered by fears that the U.S.-China trade spat could turn into a tech cold war between the two countries. 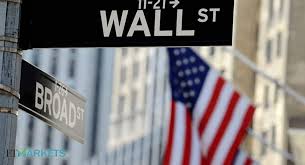 Beijing said Washington needs to correct its “wrong actions” for trade talks to continue after the United States blacklisted Huawei Technology Co Ltd last week.
Although the Trump administration temporarily eased curbs on the Chinese telecoms gear maker, tensions again mounted on Wednesday following reports that the United States was considering sanctions on Chinese video surveillance firm Hikvision.
Investors now fret that tit-for-tat tariffs and other retaliatory actions by the world’s two largest economies will crimp global growth, and especially hit the high-growth tech sector.
Apple Inc fell 2.1%, while Microsoft Corp dropped 1.6%, weighing on the S&P 500 technology sector, which dropped 1.91%.
Chipmakers, which have a higher revenue exposure to China, also declined, with the Philadelphia Semiconductor index tumbling about 3%.
Trade-sensitive industrials slipped nearly 2%, hurt by losses in shares of bellwethers Boeing Co and Caterpillar Inc.
“It has moved into a broader trade war. Initially, it was about tariffs and retaliation, now you’re talking about banning companies and it’s not looking good in the near-term,” said Scott Brown, chief economist at Raymond James in St. Petersburg, Florida.
“If you look at the U.S. economy a lot of the growth in earnings comes from what’s happening overseas. Now we see that’s not been helpful and as the domestic economy slows more than expected, that also could have a negative impact.”
Data from the eurozone added to the downbeat tone. A private survey showed business growth accelerating at a slower-than-expected pace this month, weighed down by a deepening contraction in the bloc’s manufacturing industry.
A report from ISH Markit showed U.S. manufacturing growth measured its weakest pace of activity in nearly a decade in May and new orders fell for the first time since August 2009 as the U.S.-China trade war intensified.
At 9:53 a.m. ET, the Dow Jones Industrial Average was down 388.82 points, or 1.51%, at 25,387.79. The S&P 500 was down 37.84 points, or 1.32%, at 2,818.43 and the Nasdaq Composite fell 117.75 points, or 1.52%, at 7,633.10.
Energy stocks dived 3.16%, the most among the major S&P sectors, pressured by a plunge in crude prices as low refinery runs and ongoing trade tensions weighed on demand outlook for oil. [O/R]
The prolonged U.S.-China trade war has rattled financial markets, knocking the benchmark S&P 500 about 5% off its record high hit on May 1. The index is now on track to post its worst monthly decline of the year.
NetApp Inc’s shares slumped 12%, the most on the S&P 500, after the data storage equipment maker forecast current-quarter profit and revenue below Wall Street estimates.
In a bright spot, L Brands Inc jumped 12.1% after the retailer reported better-than-expected quarterly earnings, helped by sales in its Bath & Body Works business.
Declining issues outnumbered advancers for a 6.10-to-1 ratio on the NYSE and a 5.57-to-1 ratio on the Nasdaq.
The S&P index recorded 13 new 52-week highs and 20 new lows, while the Nasdaq recorded eight new highs and 111 new lows.