U.S. stocks eked out gains in choppy trading on Thursday, as hopes of an interest rate cut outweighed fears of a flare up in U.S.-China trade tensions after comments from President Donald Trump. 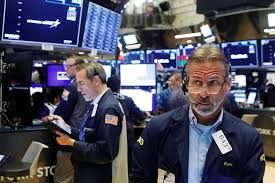 Trump said he would decide on more China tariffs “probably right after the G20” meeting later this month, which followed his threat overnight to levy duties on “at least” another $300 billion worth of Chinese goods.
The trade-sensitive industrial sector fell 0.49%, the biggest decliner among the four major sectors lower.
“We’re seeing more of what we had before that in terms of a more prolonged and protracted approach to trade policy resolution,” said Peter Kenny, founder, Kenny’s Commentary LLC and Strategic Board Solutions LLC in New York.
“We are going to continue to run up against this wall of cynicism, which is being reflected in risk-off, until we see something that is really data driven and significant in terms of policy accomplishment relative to trade that can shift that narrative.”
Weighing on sentiment was the European Central Bank’s marginally cut to the region’s growth forecasts for the next two years, acknowledging the risk that the slowdown will be longer and deeper than expected.
Markets have been roiled by worries of a global economic slowdown triggered by the ongoing U.S.-China trade spat and the pervasive uncertainty has led top Federal Reserve officials, including Chairman Jerome Powell, to hint at a rate cut.
If current levels hold, the S&P would clock the third straight session of gains.
At 10:59 a.m. ET, the Dow Jones Industrial Average was up 54.08 points, or 0.21%, at 25,593.65, and the S&P 500 was up 3.50 points, or 0.12%, at 2,829.65. The Nasdaq Composite was down 10.78 points, or 0.14%, at 7,564.70.
The energy sector, which was the hardest hit by the recent escalation in trade tensions, rose 1.03%, the most among the major S&P sectors, as oil prices gained. [O/R]
Oil majors Exxon Mobil Corp and Chevron Corp provided the biggest support with a gain of 1.4%.
Advanced Micro Devices Inc rose 5.6%, to the top of S&P 500, after Morgan Stanley upgraded the chipmaker’s stock to “equal-weight” from “underweight”.
Declining issues outnumbered advancers for a 1.19-to-1 ratio on the NYSE and for a 1.69-to-1 ratio on the Nasdaq.
The S&P index recorded 65 new 52-week highs and two new lows, while the Nasdaq recorded 45 new highs and 90 new lows.