Nigeria and West Africa’s largest airline, Air Peace Limited has denied allegations of money laundry levelled against the company’s chief executive officer, Allen Onyema and another top executive of the company, Ejiro Eghagha by the government of the United States of America. 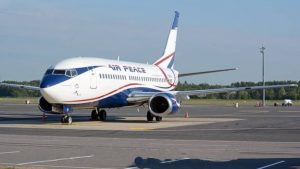 US attorney, Byung Pak had on Friday, alleged that Onyema “leveraged his status as a prominent business leader and airline executive to use falsified documents to commit fraud” worth a total of $44.9 million while purchasing aircraft in the country.

Eghagha, an executive director at the airline, was also charged with alleged bank fraud and committing aggravated identity theft in connection with the scheme.

However, in a statement on Saturday, Air Peace lawyers, A. O Alegeh $ Co absolved Onyema and Eghagha of any fraud.

The lawyers said. “On behalf of Allen Onyema, we hereby state that he strongly denies and will vigorously defend himself against the allegations made against him by the US Attorney in Atlanta, Georgia in relation to purchase of aircraft, aircraft spares and aircraft maintenance. None of the allegations involve any third party funds but relate to his funds utilised in the airline business. There is no allegation that any bank [in the United States, Nigeria or elsewhere], company or individual suffered any financial or any loss whatsoever.

“The allegations are unfounded and strange to him. Allen Onyema has a track record built on honesty and integrity and will take all necessary steps to clear his good name and hard earned reputation. He looks forward to an opportunity to rebut these

The lawyers also issued a similar statement on behalf of Eghagha.

Accusing Onyema of allegedly using banks in US to receive funds from foreign sources running into $44.9 million between 2010 and 2018 and using funds that belong to his charity organisation to acquire airplanes and parts of aircraft, acting special agent in charge of the matter, Robert Hammer alleged that “Onyema set up various innocent sounding multimillion dollar asset purchases which were nothing more than alleged fronts of his scam.”

“I’m proud to be part of a team of law enforcement agencies that come together to identify and attack criminals that attempt to profit from the exploitation of our nation’s financial systems,” Hammer alleged.