Nigeria as a nation is endowed with a vast coastline which measures 853 kilometres,running through seven states including; Akwa Ibom,Bayelsa,Cross River, Delta, Lagos, Ondo and Rivers, bordering the Atlantic Ocean. The country’s navigable inland waterways which is strategically located on the Atlantic coast of West Africa is also considered a unique and viable possession to facilitate exportation of the country’s diverse resources and also, import commodities in the global market (international trade) via the maritime industry.
A report by the Nigerian Bureau of Statistics (NBS), showed that the majority of commodities exported out of Nigeria in the first quarter of 2021 (Q1 ‘21) were transported by water which accounted for N2.8 trillion or 97.09 per cent of total exports followed by air transport which contributed N75.9 billion or 2.61 per cent,road transport was valued at N3.7billion or 0.13 per cent, while other modes of transport were valued at N5.0 billion or 0.17 per cent. 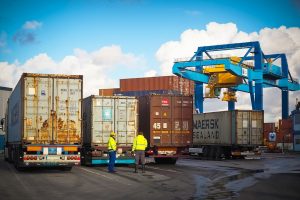 NBS further showed that during the period under review, the bulk of export transactions was conducted through Apapa port, with goods valued at N2.5 trillion or 88.91 per cent of total exports. In terms of imports, Apapa Port also recorded the highest transactions valued at N2.9 trillion or 42.73 per cent of the country’s total imports. This was followed by Tin Can Island imports valued at N1.2 trillion or 17.95 per cent , while Port Harcourt recorded N691.7billion or 10.10 per cent of total imports. imports.
Against this backdrop, the relevance of port services cannot be overemphasised in the transportation of commodities as multiple petroleum companies, manufacturing industries, and various other services are dependent upon the port sector for the exportation or importation of their goods, due to the economics of scale offered by shipping.
Unfortunately, port congestion, delay in freight handling and the poor services of port operators has been a major factor negating the efficient importation and export of commodities.

Industry analysts assert that the aforementioned challenges have negatively impacted Nigeria’s gross domestic product (GDP) by $14.2 billion as quite a number of exporters have resorted to neighbouring countries with functional ports where commodities can be easily transported to Europe, America,Asia and other parts of the world.
According to Jonathan Nicol, President, Shippers Association of Lagos, (SAL), Nigerian exporters lost an estimated N90 billion of damaged exports due to the Apapa gridlock that delayed shipping goods activities.
Nicol also observed that poor government policies, multi taxation, cost of production, corruption, lack of basic amenities at the terminals and high cost of transportation from remote areas to the ports led to the damage and hindered exportation of agriculture produce such as cocoa beans, cashew nuts, sesame seeds, semi-processed ginger and garlic, shea butter, among other agro-commodities.
He bemoaned that the available infrastructures could not contain the volume of cargo accessing the ports at the same time, while costs were uncontrollable.
“I am aware that a lot of our export cargoes were priced less due to their quality arising from Apapa gridlock. Most of the agro products are perishable. The value of these products does not meet the expectations of the exporters” he said.
On his part,Segun Awolowo, chief executive officer of the Nigerian Export Promotion Council (NEPC), said the frequent gridlock as a result of cargo congestion and access roads to the ports had become an issue of great concern to export development and promotion in Nigeria.
He added that there were constant complaints from exporters on losses incurred due to delays of consignment before access into the ports which at times rendered the products unwholesome and subsequently leading to rejection. This, he explained, has made exports from Nigeria not to be competitive in comparison with exports from other countries.
In the same vein, Pius Ayodele, president of Cocoa Exporters Association of Nigeria, recounted that about 100,000 tonnes of cocoa beans were being trapped at the ports and another 100,000 tonnes of a variety of agricultural commodities were stored in warehouses far beyond their storage time,due to the delays in getting approvals to clear containers for shipping.
Ayodele explained that the situation has forced many cocoa producers and stakeholders to abandon the export business while others hang on just to ensure their investments do not end up a waste.

Restructuring the port system to enhance export
Stakeholders in the export industry in a communique issued at the end of a supply chain round table discussion for 2021 organised by the African Centre for Supply Chain (ACSC), highlighted some solutions that would enable the government to actualise rapid decongestion at the ports and ensure a positive impact on export activities.

Some of the major solutions suggested by the group include; strengthening the customs’ post-audit system, evacuation of all over-time cargo from the terminals to create space and enhance terminal efficiency, effective consequence management for corrupt customs officials, dishonest importers and clearing agents, enforce adherence to approved standard operating procedures and call-up system, regulation of barging operations, which poses potential threat to the management of trucking activities in the port, and implementation of single window platform that will involve the major port agencies for effective clearance of commodities.
On its part, the Abuja Chamber of Commerce and Industry (ACCI) maintained its stance on the implementation of electronic call-up system as one of the most effective measures towards curbing the incessant Apapa gridlock,with a resolution that the Nigerian Port Authority should be supported in its drive towards making it a successful procedure.
Al-Mujtaba Abubakar, the ACCI president also suggested a sustained and expanded collaboration between the port authority and the Lagos State government to dismantle the forces behind the incessant gridlock at the Apapa port.
He further stressed the need for the government to introduce sanctions in the enforcement process, adding that multiple agencies operating at the port also need to harmonise their operations to reduce the current hardship in the clearance of goods at the ports.