Global population, according to the United Nations Food and Agriculture Organisation (FAO), is expected to surpass nine billion by 2050, for which food demand has been forecast to rise sharply above 50 per cent of its current rate. As a result, it is anticipated that the agriculture sector, particularly production of consumable foods, raise its output to avert what could result in a food crisis especially in urban areas where people are surrounded with limited space and resources, especially at a time the world is battling challenges of soil degradation. 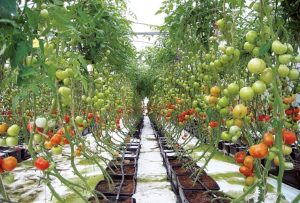 A 2015 study conducted by the University of Sheffield’s Grantham Centre for Sustainable Futures in England, found that the earth has in the past 40 years lost a third of its arable land due to the combined effects of pollution, over cultivation and heavy usage of fertilisers, climate change and adverse weather conditions which have depleted soil at a rate that is gradually outpacing the earth’s natural ability to produce efficiently. To address this challenge, alternative farming technologies have been implemented to enhance agri-food production in places previously difficult or near impossible to cultivate crops and in quantities and qualities consequently surpassing and outpacing traditional farming systems.

One of the most notable modernised farming systems is “soilless farming” also known as hydroponics farming. Hydroponic farming, according to agriculturists, is an indoor or vertical farming system which involves growing plants without soil by using mineral nutrient solution in a water solvent which helps save space, prevent soil degradation, eliminates risks of diseases caused by soil organisms and speeds up crop cycles. In addition, the hydroponically grown plants have been discovered to produce a higher yield compared to similar crops grown in soil because it is specially suited to give farmers proper control over the nutrients.

Owing to the technological advancements and high level of productivity recorded by the hydroponics farming solutions, analysts said the market is on the right track towards achieving a significant pace and adoption within the next five years. Advancements in climate control, nutrient film technique, and sensing technologies among others are also expected to bode well for the market growth in the near future.

According to Grand View Research, the global hydroponics market size was valued at $1.33 billion in 2018 and is expected to grow at a compound annual growth rate (CAGR) of 22.52 per cent from 2019 to 2025, buoyed by the increasing use of hydroponic systems for indoor farming of vegetables.

Yomi Williams, group chief executive officer of Gartner Callaway,an agricultural development company that practices hydroponics farming, explained that the hydroponic process used on his farm is a form of hydroponics known as “aeroponics,” a process in which hydroponics soil medium is utilised using coco coir,the outer coating of the coconut seed. coco coir as a substitute for soil, he explained, is sterile (free from bacteria and harmful microorganisms), has good water nutrient-holding qualities and good aeration qualities which are major factors plants need to grow and yield effectively.
Williams noted that the farming method has also enabled large amounts of greens, especially vegetables to be produced in urban environments overcoming the challenge of both minimal space and small amounts of water, a great development compared to traditional farming.

Ogbole Samson, team lead at a soilless farm lab established by Eupepsia Place Limited, expressed optimism that hydroponics,asides its remarkable market value, is one of the farming methods Nigeria needs to begin implementing to attain food security in the near future.

Samson also explained that the farming method is not capital intensive to establish as a farmer or producer can start with as little as N5,000 and achieve a turnover that is more than double of the initial investment.

Phillip Ojo,director general,National Agricultural Seeds Council (NASC), who also expressed satisfaction with the farming method, said one of the commendable things about hydroponics is that when it is used in the cultivation of a crop like cassava, it is discovered that the farming process helps to multiply the plant materials rapidly within a short period of time.

Despite the numerous advantages the hydroponics farming system presents, the practice is faced with some limitations which makes it quite difficult for agriculturists.

Debo Onafowora, founder and CEO, BIC farm Concepts,Abeokuta, Ogun State, said the production of vegetables hydroponically on his farm has been very productive with positive returns. He however noted that the government is yet to make significant steps towards putting in place structures, framework and policies to support the success and development of soilless farming.

He also noted that soilless farming is very technical intensive and not something anyone can venture without undergoing training from time to time and handling of technologically advanced equipment, unlike traditional methods of farming that require little or no training.

Onafowora called on the government to encourage the adoption of the innovative farming system by facilitating financial assistance and grants to youths and entrepreneurs willing to invest in hydroponics as an agri-business. He further stated that the farming system should be seen by the government as a way of creating employment and youth resourcefulness through the exploration of its value chain.

The BIC Farm founder also suggested the creation of private- public partnerships to encourage larger investments capable of generating revenue for both the government and private organisations.

Ogbole Samson stressed that the innovative farming system is yet to receive high patronage compared to other countries due to low awareness and the sceptical nature of many Nigerian farmers in adopting the new innovation. He also noted that Nigeria’s erratic power supply is a detriment to the success of hydroponic farming as some of the equipment, in large scale productions, demand stable electricity supply to function.

According to Samson, Nigeria needs to take hydroponics more seriously because it is fast becoming a paradigm shift in agriculture, especially in the production of vegetables. He enjoined the government and private organisations to encourage and assist in training farmers in the farming practice and also, encourage sponsorship/funding of research projects and public enlightenment programmes.