ConocoPhillips agrees to sell UK subsidiaries for $2.675 billion to Chrysaor E&P, a company focused on producing oil and gas from the North Sea.
The deal is largest sale in the exploration and production space outside the U.S. this year.
The sale continues ConocoPhillips’ asset divestments and makes Chrysaor one of the biggest UK North Sea producers. 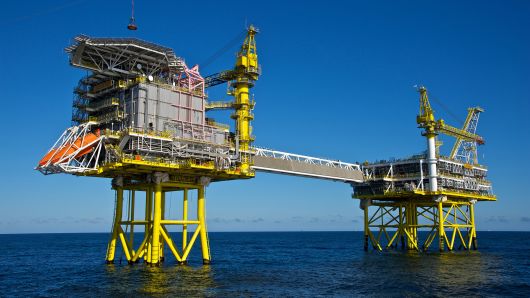 ConocoPhillips on Thursday announced it has struck an agreement to sell its UK oil and gas operations for nearly $2.7 billion, setting up its exit from the North Sea.
The Houston-based driller will sell its ConocoPhillips United Kingdom subsidiaries for $2.675 billion to Chrysaor E&P, a company focused on producing oil and natural gas from the North Sea. The transaction is expected to close in the second half of 2019.
The deal is the largest transaction in the exploration and production space outside the U.S. this year, according to investment bank Jefferies, which acted as Chrysaor’s financial adviser.
Shares of ConocoPhillips were slightly higher in morning trading.
ConocoPhillips has been marketing the assets for several months. The company will retain its commercial trading business in London and its roughly 40% interest in the Teesside oil terminal. It will also continue to operate the terminal, which receives oil and gas from the North Sea fields.
“We are extremely proud of the legacy we’ve built in the U.K. over the last 50 years and are pleased that Chrysaor recognizes the value of this business,” ConocoPhillips Chairman and CEO Ryan Lance said in a statement. “This disposition is part of our ongoing effort to hone our portfolio and focus our investments across future low cost of supply opportunities.”
Earlier this year, Conoco Chief Operating Officer Matthew Fox said the company’s major portfolio restructuring was essentially complete, with the exception of the North Sea sale. The company earned nearly $1.1 billion on dispositions in 2018.
The deal makes Chrysaor one of the largest producers in the UK North Sea.
Chrysaor will pick up offshore assets that produced about 72,000 barrels of oil equivalent per day. That increases its pro forma 2018 output to about 177,000 boepd of oil and gas. The company will take control of two major offshore production hubs, Britannia and J‐Block, and ConocoPhillips’ stake in the Clair Field area.
“This significant acquisition reflects our continuing belief that the UK North Sea has material future potential for oil and gas production,” Chrysaor CEO and former Hess executive Phil Kirk said in a statement.
The transaction continues a trend of major oil companies exiting the North Sea and placing the region in the hands of private equity-backed independent drillers.