The Federal Operations Unit (FOU) Zone C Of the Nigeria Customs Service (NCS), said it made several seizures with a duty paid value (DPV) of N492 million in the month of November 2019. 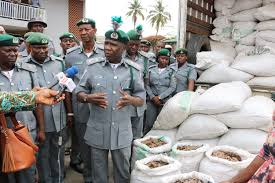 Speaking on the antics of the smugglers, Olusemire, a comptroller of Customs declared that it was the duty of every well-meaning Nigerian to volunteer information that will help stem the activities of smugglers in the nation.

He said, “Some Nigerians are desperate and are in the habit of breaking the law. These acts are undermining our economy. People should not ruin the economy of the country because of the ill gains they hope to make in business.

“We have on display here so many items that are prohibited from entering this country. It is believed that the positive outcomes of the border drill exercise, the activities of the strike force and federal operation units would cause such people to have a rethink. Instead these smugglers come up with new ideas and new ways of smuggling. We will decimate their efforts and continue to advocate that the people involved should stop this business.

We are sensitising people to fully support the federal government in building the nation.”

Speaking on the seizure of two containers of furniture Olusemire explained that though furniture is dutiable but the importers falsely declared the consignment as pumps and valves to evade paying duties. This he said contravened Section 161 of the Customs and Excise Management Act.

“The fight and the war against smuggling of rice is not yet over, it still continues. Every day, people struggle to bring in rice and we are prepared to deter them. We are informed of the rigorous efforts smugglers undertake to bring in rice and we are always ahead to stop them but we still wonder why they are insistent on bringing in rice. Some of the rice we intercepted is already expired. Some were concealed in a truck filled with granite, and in unsanitary conditions. We presently have the ongoing border drill operations, we have the strike force, the federal operations unit, and we have the commands as lines of defence against smuggling activities in the nation. So people should desist from smuggling,” he advised.

He disclosed that six arrests were made and administrative bail has been granted to the suspects.