The federal government deducted the sum of N35.51bn from allocation made to the states for external debt servicing, contractual obligations and others. 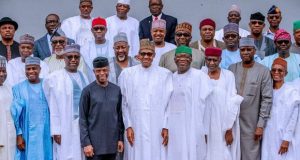 The deductions, which were for the month of September, were made from the allocations given to state governments from the Federation Account.

The federation account is currently being managed on a legal framework that allows funds to be shared under three major components – statutory allocation, Value Added Tax distribution and derivation principle.

Under statutory allocation, the federal government gets 52.68 per cent of the revenue shared; states, 26.72 per cent; and local governments 20.60 per cent.

The framework also provides that Value Added Tax revenue be shared thus: FG, 15 per cent; states, 50 per cent; and LGs, 35 per cent.

On the other hand, extra allocation is given to the nine oil producing states based on the 13 per cent derivation principle.

An analysis of the Federation Account Allocation Committee report prepared by the Office of the Accountant-General of the Federation showed that the N35.51bn was made up of servicing of N3.64bn, and contractual obligations of N5.79bn.

The sum of N26.08bn was deducted from the states for national water rehabilitation projects, and National Agricultural Technology Support Programme.

Others deductions made under the N26.08bn were salary bailout, payment for fertilizer, state water supply project, state agricultural project and National FADAMA project.

Further analyses of the N35.51bn showed that Lagos State with the sum of N3.23bn recorded the highest deductions in the month of September.

This was followed by Osun with N2.01bn while Cross River, Bayelsa, Akwa Ibom and Bauchi followed with N1.72bn, N1.35bn and N1.33bn, respectively.

The chairman, commissioners of Finance forum of the Federation Account Allocation Committee, David Olofu, told our correspondent in an interview that the committee would work with the relevant revenue generating agencies to boost revenue into the federation account.

He said at a time when the government was having challenges generating revenue, there was need to come up with innovative solutions to shore up revenues.

He said, “We would be focusing majorly on how we can improve the inflow in terms of revenue into federation account so that the states can get more money to be able to solve a lot of problems they are facing.

“It’s not just for the states; even the Federal Government can get more money to solve a lot of problems we are facing as a nation.