BY ISAAC AIDOO, in ACCRA, GHANA

Managers of Ghana’s economy have admitted the country does not have enough foreign exchange reserves, with import cover currently lasting only a month and a half, a revelation which tells the precarious state of decline the West African nation has found itself in.

The erosion of Ghana’s foreign reserves coupled with the depreciation of the local currency and a suffocating debt situation have compelled the government to take swift measures to stem forex outflows.

Ghana, which is battling its worst economic crisis in decades, announced a debt standstill so money used to service foreign debt will not go out anymore and take pressure off the foreign exchange market.

Already, the country’s hopes for a quick domestic debt restructuring has suffered major setbacks as creditors have been slow in responding to persuasion from the Ministry of Finance to exchange their current bonds for new, significantly lower value, versions.

Ghana’s Central Bank for the first time embarked on a domestic gold purchase programme to help shore up the country’s foreign reserves.

In November 2022, Vice President Mahamudu Bawumia announced Ghana had concluded talks for the operationalisation of a Gold-for-Oil policy, another measure to retain foreign exchange to bolster the Ghana cedi.

The first consignment of about 41,000 metric tonnes of the petroleum products, valued at about $43 million arrived at the country’s Tema Port.

But major partners in the Gold swap deal say they are yet to fully understand the workings of the new policy. 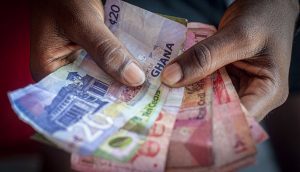 The Ghana Chamber of Mines, the umbrella body for mining companies, had called for more engagement on the policy for greater clarity. Joshua Mortoti, president of the Chamber and executive vice president of Goldfields West Africa, asked the government to “engage more on the Gold for Oil policy vis a vis retention agreements, forex sales and the domestic gold purchase programme.”

Ghana’s economic malaise, described by some analysts as one of the worst in the country’s history has compelled the New Patriotic Party (NPP) led government to push through measures to help deal with the myriad of issues

Views on the deal

Amoah maintains that a lot will depend on the value of the gold at the time of trading so it leaves a very wide gap which becomes a subject of manipulation.

According to him, “if left with the technical experts and traders in the petroleum space, we would be able to implement the policy and the country will get the benefit but once you get politically exposed persons in there to take decisions that may not be purely based on economics, we will simply be exposing our gold resource to people who would rip us off.”

Chief Executive Officer and Director of investment firm C-NERGY Holdings commented “it’s a joke,” adding “I actually don’t understand it so I have refused to comment on it.”

The proposed policy is uncommon. While countries sometimes trade oil for other goods or commodities, such deals typically involve an oil-producing nation receiving non-oil goods rather than the opposite.

Ghana produces crude oil but it has relied on imports for refined oil products since its only refinery shut down after an explosion in 2017.

Legal brains worried over how deal was fashioned

Some legal experts are of the view that an international transaction of such nature should have had some input from Ghana’s legislature.

Leading figures in the country’s opposition party, the National Democratic Congress (NDC).  have called out the government over what they describe as its ad hoc way of dealing with problems that need “deep thinking.”

Godwin Edudzi Tamakloe, a member of the NDC legal team,  wondered why an international transaction of that nature had been devoid of inputs by Ghana’s legislative arm.

The lawyer was worried that no paperwork had been seen on the floor of Parliament about the deal.

Government, he maintained, had failed to do any painstaking assessment of how much of gold Ghana was  producing monthly and how much oil was to come in.

Government is having difficulty mobilising foreign exchange for the BDCs to import fuel products. The experts have described the Gold for Oil deal as one of the ad hoc solutions of the government. No deep thinking goes into the formulation of policies and their implementation.

The latest report of the Ghana Extractive Industries Transparency Initiative (GHEITI) has made recommendations to ensure sustainability of the Gold for Oil deal.

It said broader consultations were necessary to identify the potential impact of the programme on diverse stakeholders, and to address the same ahead of implementation.

“For instance, some small-scale miners engage in forward sales with foreign off-takers who expect to receive dore in exchange for forex. This situation could increase the incidence of smuggling,” the report said.

It encouraged the government to subject the policy to periodic review and further stakeholder consultations to mitigate the risk of exposing the country to the ‘boom and bust’ cycles of the gold industry.

GHEITI further urged the government to prioritise building up its gold reserves as a mechanism for dealing with the impact of the volatility associated with gold prices by predominantly stockpiling gold when prices are low and selling when prices are high.

In June 2015, the then government put in place a deregulation policy that had the expectation of allowing marketers and importers of petroleum products to sell directly to consumers by setting their own prices.

The policy had the primary objective of bringing an end to government subsidies on the products and exchange rate losses.

With the advent of full deregulation, the burden of managing forex risks shifted from the government to the Bulk Distribution Companies (BDCs) and the Tema Oil Refinery (TOR), and any losses were their prerogative.

There are many analysts and observers of Ghana’s economy hoping that efforts underway to resuscitate the economy, with support from the International Monetary Fund (IMF), will begin to yield positive results, at least to give the business community some breathing space while providing Ghanaians welcome respite from the economic hardship that has been biting deep into lives.