Apart from the huge human resources and size that make her Africa’s most populous country‭, ‬Nigeria is so favourably located in the Gulf of Guinea that it is the epicenter of trade for West and Central Africa‭. ‬In this report‭, ‬SAMSON ECHENIM writes that harnessing the country’s dry port potential and building multimodal system of transport could herald her coveted position as West Africa’s trade hub‭.‬

For two decades and still counting, Nigerian governments have had a mind forecast of the position of the country as West Africa’s trade hub. The country has what it takes to become so. She has about 870 kilometres coastal stretch and over 200 nautical miles down the Atlantic.  It occupies an enviable position on the Gulf of Guinea, with smaller countries on both sides of her boundaries. She has the human capital and with a couple of landlocked countries around her, Nigeria could only dream less. 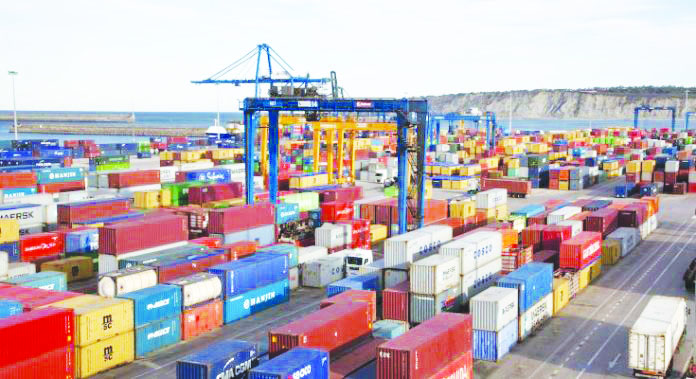 Unfortunately, none of the country’s successive governments has been willing to transform the country’s dream into reality, and yet, the dream of becoming the region’s trade hub is not impossible.

Shipping and logistics investors in the country believe that for Nigeria, improving transport infrastructure and expanding the port systems to the hinterland to serve landlocked neighbouring countries, especially for exportation is most appealing to meet the country’s trade needs as she shares significantly from the global trade growth.

Emmanuel Iheanacho, CEO, Genesis Shipping said with the shipping industry playing a significant role in taking millions of people out of poverty, it is only natural that the Nigerian government invest more in infrastructure in order to create wealth and allow the citizens feel the impact of the enormous opportunities in shipping.

Iheanacho, a former minister of interior and an operator in the oil downstream sector said Nigeria undeniably would have to improve transport infrastructure to meet the four percent annual increase in world trade volume.

He said, “Remember that we have to maximize these ports for our need as well as to serve landlocked countries like Chad. Nigeria should look at the trade needs and develop ports to serve those needs. The demand factor we should focus on is the underlying trade. How do we compare the volume of trade in 1959, 1969 and consistently over the years? If the trade has doubled over this period, then there is need to have ports infrastructure improved proportionally.”

Iheanacho also said Nigeria needed to prioritise development of human capacity in shipping rather than acquisition of vessels, stressing that ships could be mismanaged if the operators lacked the requisite skills to gainfully manage them.

Noting that Nigeria’s revenue base has grown as a result of crude oil sale over the years, he warned that it would be wrong to continue spending such revenue on imported goods, rather than improving the size of ports available in the country.

Experts have continued to make the case for multiple of inland ports to serve as ports of origin and destination, not only for Nigerian cities, but the country’s landlocked neighbours. Niger, Chad and Burkina Faso are Nigeria’s neighbours with no access to the ocean.

For instance, Niger is the 158th largest export economy in the world and the country’s import data are on a stable increase since 2012. In 2017, Niger exported $602 million and imported $931 million, resulting in a negative trade balance of $328 million.

The top exports of Niger are radioactive chemicals ($329 million), refined petroleum ($96.2 million), oily seeds ($93.3 million), gold ($28.8 million) and petroleum gas ($20.2 million). Its top imports are medicaments ($71.5 million), rice ($53.9 million), palm oil ($42.3 million), pesticides ($35.1 million) and cement ($34.2 million). All these goods can be handled at an inland port closest to the country in Nigeria, thereby creating millions of jobs and activating a channel earning billions of naira into the coffers of the government.

Nigeria’s legislature recently revisited the need to build inland ports across the country to not only decongest the ports in Lagos, but also bring shipping to the door step of the importing public. This was sequel to a unanimous adoption of a motion by Ajibola Muraina (PDP-Oyo) at the plenary.

Muraina said that the establishment of inland dry ports otherwise known as Inland Container Depots (ICDs) and Containers Freight Stations (CFS) by the Nigerian Shippers Council was highly commendable. The lawmaker said that action would lead to economic development of the nation by creating more jobs.

Muraina said that the dry ports are ports of origin and destination located in the hinterland, as they receive containers by rail or road from the sea ports for examination and clearance by customs and other competent authorities.

He recalled that the seven approved locations for the ICD and Container Freight Stations (CFSs) were concessioned to private sector operators by the ICD Implementation Committee of the Ministry of Transportation.

According to him, the dry ports are to provide impetus to revive and modernise the railways as primary mode for long distance haulage.

Muraina said that beside the Kaduna Inland Dry Port which is first of its kind in Nigeria and was commissioned by President Muhammadu Buhari in January 2018, other dry ports should be encouraged to come up in other areas of the country.

The legislator is convinced that with such ports across the country, strategically located at various regions of the country, importers and exporters would stop diversion of cargo to neighbouring countries which is depriving Nigeria of much-needed revenue.

His submission has led the house to mandate the committees on Land Transport, Ports and Harbour to ensure the completion of the other ports, currently being championed by the Nigerian Shippers Council.

“What we want is that with rail, we can tract the containers, so that there will not be any diversion. It is important that the Customs do not lose revenue. That is very important.

“We had meetings with Niger three weeks ago. They want their cargo to come through the Kaduna dry port. Already the Kaduna State government has led a trade delegation to Niger to consolidate the trade arrangement.”

Meanwhile, shipping activities at the Kaduna inland port have begun to pick up.

Hassan Bello, executive secretary of the Nigerian Shippers Council, promoter of the inland ports across the country, said the Kaduna dry port would need more capacity for export processing. He said the port, which is functioning in full capacity, has received generous attention from the state government, which recognizes the importance of the project.

Bello said, “Kaduna State government has been solidly behind the Kaduna dry port. It has provided so many things for the port. The state government has done the port access roads and provided security, electricity, water and other infrastructure. So, what we are trying now to do is to make Kaduna security compliant, through the ISPS Code. Then, we would be working to have the FIATA recognise the port and that we are doing with the Council for the Regulation of Freight Forwarding (CRFFN).

“Becoming the trade hub in West and Central Africa is a vision we must pursue with great zeal. It is something that is possible and as a country, we have the potential. Nigeria can serve Niger, Chad and Burkina Faso and other landlocked countries with various dry ports, which have same status with seaports.