Ngozi Okonjo-Iweala, Nigeria’s two-time minister of finance and the country’s candidate for the top job of director general of the World Trade Organisation (WTO), received further global endorsement of her candidacy on Monday from non-governmental organisations, philanthropists and business leaders, including Mo Ibrahim, founder and chairman of Mo Ibrahim Foundation; Mary Robinson, former president of Ireland; Kevin Watkins, chief executive officer of Save the Children, United Kingdom; Bono, co-founder of The ONE Campaign; Aliko Dangote, founder and chief executive officer of Dangote Group; and Strive Masiyiwa, executive chairman and founder of Econet Group, among others. 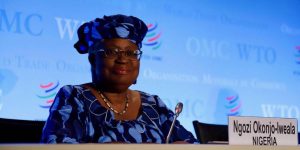 In a joint open editorial written by them and published and circulated worldwide by Business A.M.’s global partners, Project Syndicate, they averred that given a number of developments in the world, as well as operating in an interdependent world, where an open multilateral trading system overseen by the WTO can benefit all countries, Okonjo-Iweala was well positioned for the job as director general of the WTO.

“Okonjo-Iweala is well placed to work with governments to build that system. The hallmark of her career has been an unwavering commitment to poverty reduction, marginalized people, and gender equity. Under her leadership, the WTO would be a force driving progress toward the SDGs,” they wrote.

They acknowledged the current state of the world, noting that the global trading system was under severe pressure, and thus requires international cooperation to strengthen a rules-based order, adding that more than at any other time, the world needs a WTO that will support economic recovery, defend multilateralism, rebuild trust and rise to the twenty-first-century challenges posed by poverty, inequality, climate change, and especially more immediately, the Covid-19 pandemic.

They said trade matters to ordinary people around the world, but that it was all too easy to lose sight as to why it does, adding that while aid plays a critical role in advancing human development, it was through trade and markets, from local to global, that people work their way out of poverty and countries create jobs, build prosperity, and seize business opportunities.

Trade offers a route, for the world’s poorest countries, to higher value-added production, they further wrote, adding that if international trade was managed effectively, and linked to strategies for inclusive growth, it can help realize the ambition of the Sustainable Development Goals (SDGs) to eradicate poverty and build shared prosperity. “With the world teetering on the brink of historic reversals of hard-won progress on reducing extreme poverty and malnutrition, combating child mortality, and extending educational opportunity, we need a trading system that works for the poor,” they stressed.

They acknowledged that none of the benefits of trade is automatic, but that it was for this reason that the WTO needed a director-general who is equipped to work across political divides, build bridges, and find practical solutions. “In short, it needs a leader who can work with governments, helping them rise above their differences to find common ground,” they stressed.

In emphatically pitching their tent for the candidacy of Okonjo-Iweala, they stated: “We write as representatives of non-government organizations, philanthropists, and business leaders united in our conviction that Ngozi Okonjo-Iweala is uniquely well placed to lead the WTO into a critical new era.”

According to them, the Nigerian candidate is uniquely well placed to play that role. They articulated the qualities of Okonjo-Iweala that formed the basis for their endorsement of her candidacy as follows:

Nigeria’s August headline inflation forecast to inch up to 11.15%