Global: Sentiment across the global space was mixed this week, as the ongoing conflict in Ukraine remains in focus. Starting in Asia, markets in the region traded in a mixed manner, with the Japanese Nikkei-225 and south Korean Kospi closing higher, while the Shanghai Composite and Hang Seng Index closed in the red w/w.

Meanwhile, across European markets investor focus remains on developments around the Russian-Ukrainian conflict; on Wednesday, Russian President Vladimir Putin announced that “unfriendly nations” would have to pay for natural gas in Russian Rubles–as the nation responds to sanctions levied against it by Western powers. The German Dax fell 0.44% w/w, with the French CAC falling 0.61%; on the other hand, the London FTSE-100 was up 0.75% w/w. Finally, across North America, major markets in the region were trading in the green w/w at time of writing. The health of the economy remains at the focus for investors, as they digest the latest batch of economic data. Consumer confidence in the United States fell in March, according to a final report by the University of Michigan published on Friday. The Michigan Consumer Sentiment Index (MCSI) dropped to 59.4 in March, a 5.4% dip m/m. Elsewhere, the prices of oil futures eased after the EU announced it reached an agreement with the U.S. to receive deliveries of liquefied natural gas, following the ban of Russian gas in several markets. The Dow Jones Industrial Average was up 0.25% w/w, while the Nasdaq Composite and S&P 500 were up 2.06% and 1.37% respectively.

Domestic Economy: In its second meeting of the year, the Monetary Policy Committee (MPC) voted to keep all parameters constant. Unlike Ghana and Egypt which raised their policy rate to combat inflation and defuse currency pressures, six members of the ten-man committee upheld the status quo. The apex bank restated its pro-growth view, as it expects the Nigerian economy to expand by 3.24% y/y in 2022 (Vetiva: 2.8% y/y). The Committee also expects its development finance activities to subdue inflation over time. However, the big question remains, can the CBN remain neutral during a time of monetary policy normalization? In light of the monetary policy trilemma, a weaker exchange rate or a higher interest rate may be required to boost capital inflows, especially at a time of increased geopolitical tensions.

Equities: Nigerian equities closed in the red this week, as broad-based losses saw the NGX fall 0.67% w/w to 46,958pts. Players in the Consumer Goods space lead all loses observed as the sector fell 1.10% w/w; the sell side action in FLOURMILL (-3.13% w/w) and UNILEVER (-1.48% w/w) primarily weighed on the sector’s w/w performance. Moving to the Banking Sector, broad based losses across the space saw the banking index fall 0.66% w/w. Likewise, in the Industrial Goods space, marginal losses in WAPCO (-0.62% w/w) saw the sector fall 0.02% w/w. Finally, the Oil and Gas space closed lower this week, shedding 0.02% as losses in mid-cap names weighed on its performance.

Fixed Income: Activity across the fixed income market this week was largely sell-side skewed amidst pockets of demand in select sessions. At the start of the week, the Debt Management office conducted the March bond auction where, it offered ₦150 billion and sold ₦296.37 billion across the 10-Year and 20-Year tenors at stop rates of 10.15% and 12.70% respectively. In the bonds space, yields on benchmark bonds rose 8bps on average w/w, sparked by sell-side action at the short-mid end of the bonds curve. Of note, the yield on the 14.20% FGN-MAR-2024 bond rose 60bps w/w to settle at 7.80%. Meanwhile, activity across the OMO and NTB spaces was largely muted this week albeit with pockets of activity on select days. Yields in the OMO space closed flat w/w, while falling 7bps on average across the NTB space. 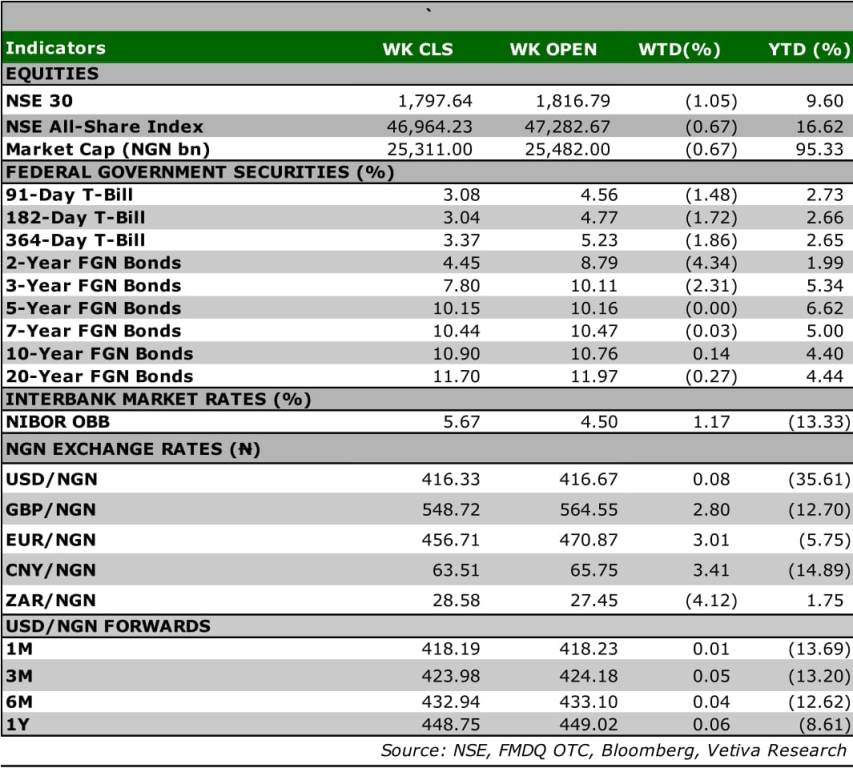 Equity market: We anticipate further mixed sentiments to start off the new week, amid gradual fizzling out of the effects of corporate actions that has dominated market activities.

Fixed Income: Following the aggressive sell-side action that dominated the bonds space this week, we expect next week to start on a more positive note, amid pockets of buy-side action across the bonds space. In the NTB and OMO markets, we expect liquidity and the latest PMA results to continue to dictate market activity.

Access Bank’s audited FY’21 results showed significant improvements in earnings across all income lines, culminating in a 22% y/y growth in Gross Earnings to ₦931 billion, exceeding our estimate of ₦868 billion. The impressive earnings beat came as the result of a 23% y/y jump in Interest Income to ₦602 billion, which was driven by a 35% y/y growth in Total Assets to ₦11.7 trillion, with asset yield of 8.6%. Furthermore, the bank saw a 31% y/y rise in Non-Interest Revenue (NIR) to ₦330 billion, thanks to net foreign exchange gains of ₦101 billion, a major swing from the ₦8 billion loss on this line item in 2020.

On the other hand, although it is noteworthy that NPLs moderated to 4.0% (FY’20: 4.3%) despite the acquisitions of subsidiaries in Eastern and Southern Africa, the bank reported larger than expected provisions of ₦83 billion, a 32% y/y rise which management partly attributed to these subsidiaries. Meanwhile, Opex grew at a 14% y/y rate to ₦371 billion on the back of a 17% y/y rise in AMCON levy and a 32% y/y rise in staff costs, which could also be partly attributed to the bank’s expansion to new markets during the year. Despite this, the bank’s cost to income ratio fell to 58.8% from 63% in 2020 and was at the lowest level since 2016.

Reversing the trend from the previous year, the bank’s Q4 performance bolstered FY profits, realizing ₦279 billion in Gross Earnings, a 15% q/q increase. Although Interest Income moderated 13% q/q to ₦131 billion, NIR grew 62% q/q on the back of debt recoveries of over ₦39 billion in the final quarter alone. In addition, the bank’s Assets grew 13% in Q4, as further acquisitions in Botswana and Zambia helped to grow total assets by ₦1.3 trillion.

However, the bank’s provisions also surged over 300% q/q to ₦44 billion, while Opex was 21% lower than in Q3. This meant that ACCESS saw an 11% q/q growth in PBT to ₦42 billion for Q4 alone, the best Q4 performance in the bank’s history. Given the bank’s expanded operations and significant growth seen in its subsidiaries across Africa and the UK, we expect the bank’s transition to a Holdco structure, which is due to be completed sometime in Q2, to further bolster earnings and asset growth, as the subsidiaries are given bigger targets and more incentive to extract value from their respective markets.

With management keen to emphasize the long-term potential of many of the markets which the bank entered in 2021 such as Botswana and South Africa, we expect to see further improvements across these and other markets in the bank’s network in the near to medium term. Thus, we project FY’22 Gross Earnings of ₦1.04 trillion (Previous: ₦920 billion), driven by an improved Interest Income forecast of ₦688 billion (Previous: ₦652 billion) and NIR of ₦356 billion (Previous: ₦268 billion).

The bank’s ₦1.00/share dividend payout exceeded our expectation of an 85 kobo total dividend for the year. Although the payout ratio of 22% is slightly lower than the previous year (27%), the improved earnings expectation for the coming year and subsequent period has driven up our valuation of the stock to ₦14.95 (Previous: ₦11.79). However, we do note that Access Bank’s dividend payout remains below peer average of 35%. Applying this average to our scenario analysis yields a total dividend of ₦1.77 for 2022 and a price target of ₦18.99. The stock is currently trading at a 50% discount to our target price and P/E and P/B values of 2.1x and 0.3x respectively, below peer averages of 3.8x and 0.5x.

Whilst reasonable care has been taken in preparing this document to ensure the accuracy of facts stated herein and that the ratings,